Why We are Here 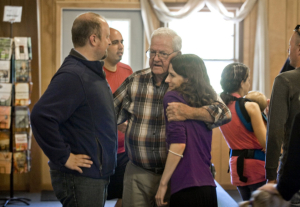 We believe that our very existence as a church and as Christians is to love God with all that we have, and to love People unconditionally.

We believe that the sixty-six books of the Bible are fully and completely inspired by God, with none to be added or deleted. 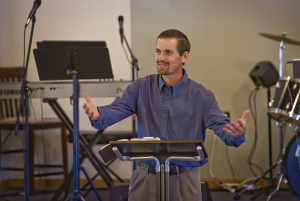 Our Leadership Team here at New Journey Church of God Holiness. Learn more about Pastor Kevin Askew and the staff.

Why We are Here – Our Mission:

We believe that our very existence as a church and as Christians is to love God with all that we have, and to love People unconditionally

No matter where you may on life’s journey or what kind of relationship you have with God, we welcome you just as you are the same way God welcomes everyone into His family!

We believe that Jesus gave us the basics of what it means to follow Him.

♦ 27 Pure and genuine religion in the sight of God the Father means caring for orphans and widows in their distress and refusing to let the world corrupt you. (James 1:27)

♦ Teach them to observe all things that I have commanded you. And the things that you have heard from me among many witnesses, commit these to faithful men who will be able to teach others also.
(2 Tim. 2:2)

♦ 16 All Scripture is given by inspiration of God, and is profitable for doctrine, for reproof, for correction, for instruction in righteousness, 17 that the man of God may be complete, thoroughly equipped for every good work. (2 Timothy 3:16-17)

The great thing about God is that even He loves us right where we are, He doesn’t just leave us there.

At one point in our lives we may be the one being helped, but God wants to build us up into people that will be able to help others and make a difference in our world!

We believe that the sixty-six books of the Bible are fully and completely inspired by God, with none to be added or deleted. They give, with-out error, the will of God, and all truth needed to lead people into salvation. They are the foundation and the source of our faith.

We believe in one God, the Creator of all things who reveals His deity as the Father, Son, and Holy Spirit. Our worship is one in which we proclaim the name of Jesus Christ, who is God’s Son.

About Man and His Savior

About the Holy Spirit

We believe in the Holy Spirit, who is active in the world convicting of sin and convincing of the need of salvation, bringing new life to those who repent and believe, living within believers to give power to live a holy life, and guiding us into all truth.

We believe that the Holy Spirit has given spiritual gifts to all believers for the purpose of building up the body of Christ and bringing glory to God. These gifts are to be exercised in love and used to promote the unity of the believers.

We believe God has given two sacraments, the Lord’s Supper and Baptism. The Lord’s Supper (Communion) is a remembrance of Jesus’ sacrificial death for our sins. Baptism is an outward sign of
the inner work of God’s grace in salvation.

About the Holy Spirit

We believe in the Holy Spirit, who is active in the world convicting of sin and convincing of the need of salvation, bringing new life to those who repent and believe, living within believers to give power to live a holy life, and guiding us into all truth.

We believe that the Holy Spirit has given spiritual gifts to all believers for the purpose of building up the body of Christ and bringing glory to God. These gifts are to be exercised in love and used to promote the unity of the believers.

About the Second Coming

We believe Jesus Christ will return. All who have accepted Him will be raised, and caught up to spend eternity with Him in heaven, while those who have persisted in sin and evil will be sentenced to suffer eternally in hell.

We believe that sanctification is the in-filling of the Holy Spirit, in which we, as believers, are purified and empowered, and brought to a place of full commitment to God so there is obedience out of love.

Kevin remembers kneeling by an alter at Harmony Hill Youth Camp as a young teenager, and surrendering his life to God’s service. After high school God led him to Kansas City College and Bible School (now Kansas Christian College) where he graduated with a Bachelor of Pastoral Ministry degree in 2002. Two weeks later Kevin and Aimee were married, and began their life together.
He served as assistant pastor of Rosedale Church of God for 2 years before feeling the call of God to move to Belton and assume the pastoral leadership here in May, 2005.

Kevin and Aimee see their ministry as a partnership and their three children as a gift from God.

Kevin is passionate about discipleship, and helping individuals and families realize their full potential in Christ. He loves to run, hike, play with his kids, and enjoy God’s creation as much as possible!

Aimee Askew has been the Children’s Ministry Director at New Journey COGH since 2005. Aimee has a B. A. in Elementary Education and a M.A. of Education and Innovation from Webster University. She teaches full time at Overland Christian Schools as the 1st and 2nd grade teacher and assistant early childhood director. She has 18 years of experience working with children in various capacities from toddlers through junior high.

Although she is very busy as a teacher, mom and ministry leader, Aimee has a deep love and passion for seeing children know and love Jesus for a lifetime, and makes her Kingdom Kids a priority in her life.

Aimee loves spending time with friends and family, and scrapbooking (when she has a chance!). 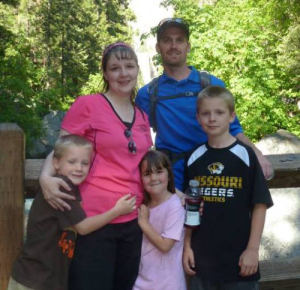 Jon grew up in Tulsa, Oklahoma. He always loved music, and he took lessons in violin, trumpet, guitar, and drums in his elementary and high school years. In 2006, he graduated from Bible Fellowship School. His parents insisted that he spend at least a semester at a Christian college. In August 2006, he arrived at Kansas Christian College. His intention: put in his “required” semester and move back to Tulsa. He didn’t really know what he wanted to do with his life, but he was sure it didn’t include KCC. While in college, God spoke to Jon’s heart. Jon turned everything over to God- his passions, plans, desires, and God began molding him. Jon has always had a passion for music, but it was during his time in college that he got some opportunities to lead his peers in worship and started discovering his passion for seeing other people led into worship. In 2011, he graduated from Kansas Christian College with his associates of arts in worship ministry. Jon has a passion for authentic worship, and a passion for teaching others to be a worshiper of God in every part of life. In addition to being our Worship Leader and Youth Leader, he is also a student recruiter for Kansas Christian College.

Sandra Kreutzweiser grew up in Mansfield, MO, a little town in south-central Missouri. In the summer of 2005, she took a 3 week missions trip to Curitiba, Brazil. She was touched by the kids that she ministered to in the schools and slums. She prayed that God would use her for His Purpose, whenever and wherever He chose. In 2006, she graduated from Mount Zion Bible School, and moved to the Kansas City area for college. She knew she wanted to be a nurse, but she also wanted to remain strong in her Christian faith. She started her education at Kansas Christian College, and eventually graduated from the University of Kansas School of Nursing in 2011, with a Bachelor of Science in Nursing. She currently works at The University of Kansas Hospital as a registered nurse.

Jon and Sandra met at Kansas Christian College in 2006. They quickly became good friends; although people commented that were an unlikely pair. After 4 years of dating, they were married in May 2011. They dedicated their marriage to working together to serve Jesus. In the summer of 2011, they joined the New Journey Church of God Holiness ministry team. They continued to commute from their apartment in Mission, KS, twice a week. They felt God calling them to be more connected with the people in Belton, and the distance was becoming a barrier. In March 2013, they purchased their first house, and moved to Belton, less than 5 minutes from the church. They asked God to use their house for His Kingdom work, and in August 2013, God did just that! Jon and Sandra started a youth group at New Journey, and they met in the Kreutzweiser living room on Wednesday nights. Since that first night, the youth group has grown and split. Sandra continues to lead the LAUNCH group, and Jon leads the SOAR group.

The Kreutzweiser’s also host the Sunday night small group at their home.

Jon and Sandra have a love for God and serving his kingdom. As a result they love people, and have a passion to see people grow in a relationship with Him. They would love to see you at New Journey Church. 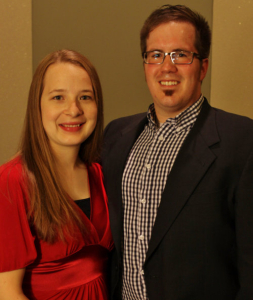 Chad and Karey Pollard have attended New Journey Church since 2010. Chad and Karey Married in 2003 and have 3 beautiful little girls, Mackenzie, Myleigh and Macie. These 3 girls keep their parents busy. All 3 girls love to attend church and definitely love to sing praise and worship songs.

Chad has a Bachelor’s in Pastoral Ministries from Kansas Christian College with a Masters in Ministry from Indiana Wesleyan University. Chad has always had a passion for ministry and currently helps Pastor Kevin with pulpit responsibility and is also one of the teachers for the Adult Sunday School class. Chad serves as the Chairman for the financial committee. He currently is on staff at Kansas Christian College as Vice President of Operations and Admissions and also oversees the K-12 school as Administrator of Overland Christian School. Chad wears many hats but definitely has a passion to further the Lord’s work and serve others.

Karey graduated in 2004 with her Bachelors in Nursing from Saint Luke’s Nursing School. She went on to pursue her career in nursing for many years. God brought a change of events into her life and she now currently is a stay at home mom pursuing her passion with her health and wellness business by helping others learn how to get healthier from the inside out. She currently serves in children’s ministry by helping teach junior church and fills in where needed. Karey has a heart for God and believes in the importance of teaching children about Jesus Christ. Train up a child in the way they should go. 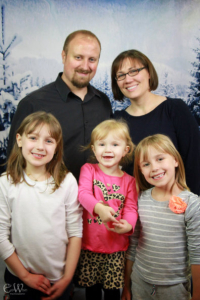